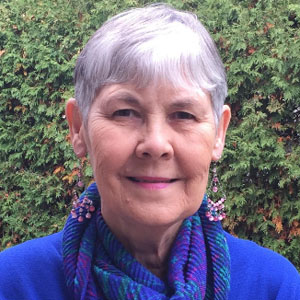 Barbara Dick's teaching career has spanned 44 years, 33 of them in ESL.  She started in 1969 at age 19 with just a year of Teachers’ College under her belt, bravely attempting to teach a class of forty-five Grade 5 students!  By 1980 she had obtained her BA at the University of Manitoba and taken a year of post-graduate courses in ESL and cross-cultural education, so she moved into teaching ESL exclusively as the wave of 'Boat People' had begun arriving from SE Asia after the Vietnam War.

She has taught in both elementary and secondary schools, in adult education with colleges, school boards and government, in First Nations communities in northern Manitoba, and overseas in the international school system in Lesotho, Africa. One of the highlights was the opportunity of teaching ESL to newly-arrived Kosovar refugees at K.A.R.E.S., the Kosovo-Albanian Refugee School that was administered by TESL Ontario at the Canadian Forces Base in Trenton in 1999. Her career also involved writing two adult ESL curriculum resources for the Manitoba government, one about going to the dentist and the other about intercultural parenting.

Barbara believes in the importance of professional development and networking.  From the beginning when she experienced the challenges of first-year teaching, she has appreciated the value of being mentored and supported by administrators and colleagues.  In turn, she has always tried to pay it forward by mentoring others, sharing ideas and materials, and by being a supportive team member.  She sat on both the TESL Manitoba Executive (1980's) and the TESL Kingston Affiliate Chapter Executive (2003 - 2016) where she served as the Membership Secretary and President. She still represents TESL Kingston on the QLIP (Quinte Local Immigration Partnership) in the community.

Although she retired from full time teaching in 2013, Barbara continues to stay active in the ESL field with volunteer teaching of Syrian refugees, tutoring ESL students, and helping newcomers adjust to life in Canada in whatever ways she can.  ESL, for Barbara, is a way of life - a natural extension of a wonderful career.