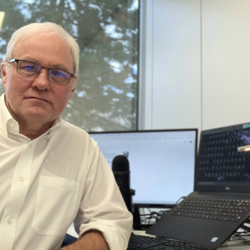 John Allan first experienced a TESL Ontario event at the King Edward Hotel in 1988.  Since then, he has been a contributor to TESL communities in various capacities.

To be honest, John entered the profession with a desire to earn cash while traveling, but was quickly drawn into the profession through meeting and working with motivating personalities and opportunities. At Brock University, professors John Sivell, Hedy McGarrell, Ernie Harris and John Kooistra inspired him to move forward with a TESL career.

Not one to sit still, John has since taught at Brock University, Niagara College, the Niagara Catholic District School Board, the Centre for Language Training and Assessment (now Achev), Abu Dhabi Men’s College, the College of the North Atlantic – Qatar and Algonquin College.  He has functioned as an instructional designer developer at Red River College, CNAQ, HSBC, Niagara College and on the New Language Solution’s Avenue Project.

John has also worked on several web sites including TESL Ontario, TESL Canada, TESL Niagara and the CLTA in the early days.  Other related projects included designing and facilitating the Creating Vocabulary Activities and Digital Materials Production courses for the TESOL Electronic Village Online.  He served on the TESL Ontario Social Media Committee in the initial years.  He is amazed at how much TESL Ontario’s digital offerings and support have grown over the past decade.

John’s interest in technology enhanced language learning has led to teacher support guides, open learning objects, blog posts, online courses, targeted workshops, webinars, conference presentations, and magazine articles many of which can be linked to from his LinkedIn page (https://www.linkedin.com/in/johnharoldallan).

He feels that he benefits as much as his participants at professional development events through their feedback on technical alternatives, insights on innovative teaching applications of using technical tools with learners, and the preparation for these events. Working on professional growth events is a pleasure as the majority of people who attend genuinely care about this profession.  Currently, working with so many dedicated professionals on New Language Solution’s projects which have included Avenue, ONYX.on, edulinc, LearnIT2teach, rollr and related projects such as Tutlea make showing up to work every day a pleasure after more than thirty years in TESL. 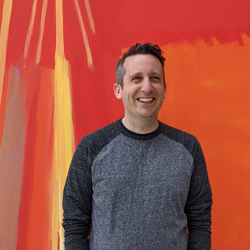 David Hazell has been an English language educator since 2003. He has an MA TESOL from University College London.

He began his teaching journey in the UK, teaching in language schools in Brighton and London. In 2004, he moved to Japan where he taught in Kyoto and around the Kansai region. David enjoyed living in Japan so much that he stayed for five years teaching Business English and Test Prep classes.

In 2009, David arrived in Canada and began working in private language schools in Toronto. He began working as an ESL Teacher at English School of Canada in 2010 before moving into the role of Director of Studies at the school in 2012. In his role as DOS, he managed a team of teachers and the day to day running of the school. He oversaw teacher hiring and training, program and class scheduling, continuous professional development, and curriculum development. Working with teachers with a range of experience levels, he particularly enjoyed working with novice language teachers and supporting them through the early stages of their career.

David served on the TESL Ontario Board of Directors 2015-2021. He was Chair, Vice-Chair, and Treasurer during his two terms on the Board. He also served as Chair of the TESL Ontario Private Sector Committee 2017-2020. His time on the Board was a wonderful and inspiring learning period, during which he was lucky to collaborate with many inspirational individuals working and volunteering for the organization.

David has worked as a part-time teacher educator at Humber College since 2019, teaching courses on methodology and grammar on their TESOL program. He currently teaches on the Content and Language Integrated Learning course to overseas educators teaching in EMI environments.

Since 2021, David has been working as a Program Manager at York University English Language Institute (YUELI). There, he manages the Academic Program assisting international students in their pathway to degree programs at York University. He is also responsible for the short-term immersion programs as well as customized programs. This role has provided David with exciting new challenges and opportunities to develop by working with diverse student groups and in areas such as program development.

Nominations for the Sparks of Excellence Award are accepted in the summer each year and winners will be presented with their awards at the TESL Ontario Annual Conference each fall.